Learning Target: I will unpack causes and effects of the Military-Industrial Complex by analyzing President Eisenhower's speech so that I can better understand the power our military has in America. 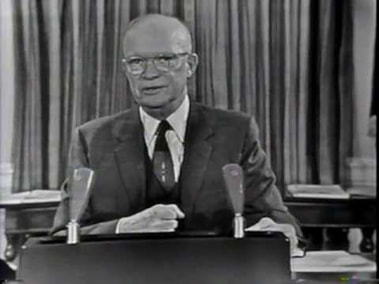 Read the following excerpted speech from President Dwight Eisenhower, and answer the questions following the excerpt. It was his farewell address given on January 17, 1961. The speech is considerably longer, but I have excerpted it for the main part discussed here.
"Good evening, my fellow Americans. … This evening, I come to you with a message of leave-taking and farewell, and to share a few final thoughts with you, my countrymen. …We now stand ten years past the midpoint of a century that has witnessed four major wars among great nations. Three of these involved our own country.

​Despite these holocausts, America is today the strongest, the most influential, and most productive nation in the world. Understandably proud of this pre-eminence, we yet realize that America's leadership and prestige depend, not merely upon our unmatched material progress, riches, and military strength, but on how we use our power in the interests of world peace and human betterment.

​(Line 11)…We face a hostile ideology global in scope, atheistic in character, ruthless in purpose, and insiduous [insidious] in method. Unhappily, the danger it poses promises to be of indefinite duration (i.e. no end in sight)…. Until the latest of our world conflicts (WWII), the United States had no armaments industry. American makers of plowshares could, with time and as required, make swords as well. But we can no longer risk emergency improvisation of national defense.

We have been compelled to create a permanent armaments industry of vast proportions. Added to this, three and a half million men and women are directly engaged in the defense establishment. We annually spend on military security alone more than the net income of all United States … corporations. Now this conjunction of an immense military establishment and a large arms industry is new in the American experience. The total influence -- economic, political, even spiritual -- is felt in every city, every Statehouse, every office of the Federal government. We recognize the imperative need for this development. Yet, we  must not fail to comprehend its grave implications… In the councils of government, we must guard against the acquisition of unwarranted influence, whether sought or unsought, by the military-industrial  complex. The potential for the disastrous rise of misplaced power exists and will  persist. We must never let the weight of this combination endanger our liberties  or democratic processes. We should take nothing for granted. Only an alert and knowledgeable citizenry can compel the proper meshing of the huge industrial and military machinery of defense with our peaceful methods and goals, so that 33 security and liberty may prosper together…"

Part Two: Questions about the reading and chart below 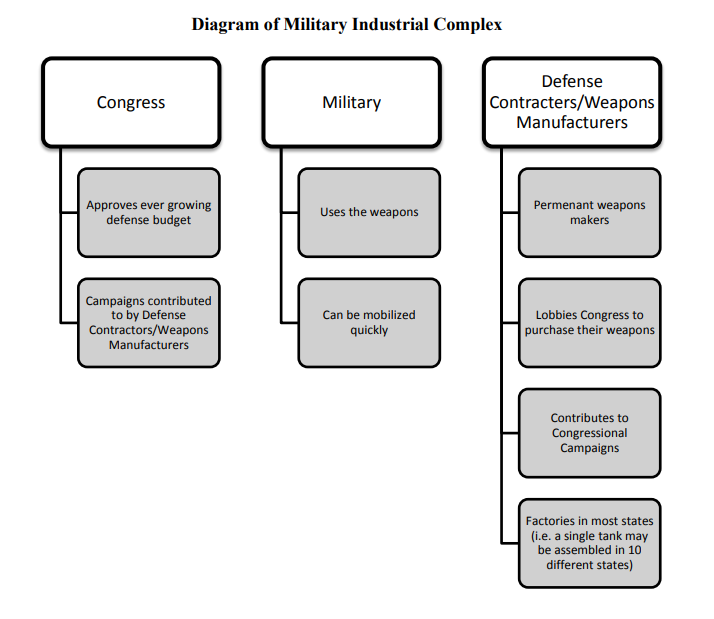 Use a separate piece of paper to answer the following questions in complete sentences.
1. What is the Military industrial Complex? Do not look it up on google (this will be incorrect). Use the diagram and Eisenhower's speech to put it into your own words.

​2. ​Who is Eisenhower referring to in line 11 as a “hostile ideology?”

4. Did this permanent arms industry exist prior to WWII? 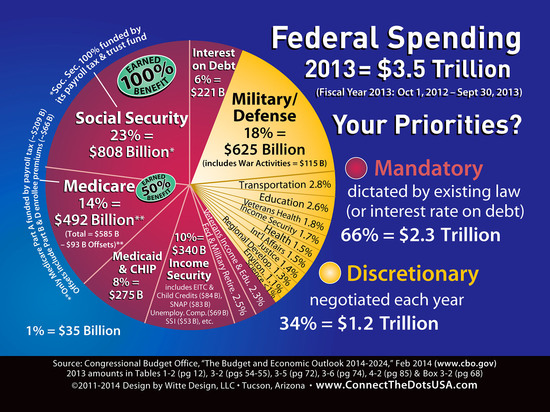 According to this chart, what amounts of money, and percentage of our spending as a country goes to military?

With a partner discuss ways that you agree and/or disagree with this spending.

Choose one of two videos to watch and answer a prompt on. You will send a google doc to Mr. Middleton. This should be a large paragraph that explains your thinking.
If you choose...
"Why more military spending is a bad idea" https://www.youtube.com/watch?v=6q1uDuBwtE8
Then...
Answer the question using evidence (PQC) from the video. "Why is more military spending a bad idea?"

"What will $716 Billion buy you?" https://www.youtube.com/watch?v=-DGRI18PDwA
Then...
Answer the question using evidence (PQC) from the video - "What is our money going toward with regards to military spending?"