Learning Target:  I will write an essay describing the causes and impact of the Peloponnesian War so that I can understand its impact on Ancient Greece. ​ 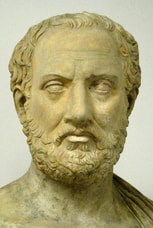 Document 2:  Reaction to the Athenian defeat
They were beaten at all points and altogether; all that they suffered was great; they were destroyed, as the saying is, with a total destruction, their fleet, their army, everything was destroyed, and few out of many returned home. Such were the events in Sicily. . . .
When the news was brought to Athens, for a long while they disbelieved even the most respectable of the soldiers who had themselves escaped from the scene of action and clearly reported the matter, a destruction so complete not being thought credible . . . Already distressed at all points and in all quarters, after what had now happened, they were seized by a fear and consternation quite without example  . . . [T[hey began to despair of salvation.
---Thucydides, The Peloponnesian War

* This passage deals with the Athenian defeat at Syracuse. How did Athenians react to this loss? *
​ 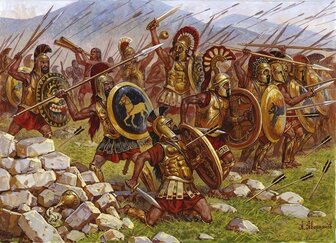 Document 3:  The Cost of the Peloponnesian War
The economic consequences of the war were grave.  Commerce by land and sea was disrupted . . . Agriculture suffered in most of Greece . . . A good deal of territory was [ruined], and livestock and farming implements destroyed as well as growing vines and olive trees . . .
In Athens, as many as fifty thousand people had probably died of the plague . . . War casualties seem to have included at least five thousand . . . soldiers and twelve thousand sailors . . . Probably the number of adult male citizens in 403 was half what it had been in 431.
---Sarah B. Pomeroy and others,
A Brief History of Ancient Greece
* What was the human cost of the Peloponnesian War to Athens? *
Collaborative Station: Notes - Peloponnesian War
Directions: With one partner, complete the notes page based on the file given. Work through the PowerPoint together, and color and doodle on your notes page to make it look great. Take your time and think through the slides. Try to explain to each other. You will be responsible for the information on the slides in an assessment, so the point is not to get it filled out, but rather to learn the material. Access this file from your Google Classroom.
Online Station: Edpuzzle
Directions: For this station, please watch these two Edpuzzle videos and complete the questions that go along with them.
Assessment: Write an Essay
Directions: Write a four-paragraph essay examining the causes and impact of the Peloponnesian War. Use information from the stations and your textbook to support your argument.
Step 1: Make an outline
Step 2: Write a rough draft
Step 3: Edit/revise work
Step 4: Write your final draft
Use the Power Outline format to organize your essay.