There are TWO main parts to this test (50% each). First, you will have some content that you will be responsible for knowing. The second part is assessing how well that you can use a historical thinking skill to investigate an issue. ​ 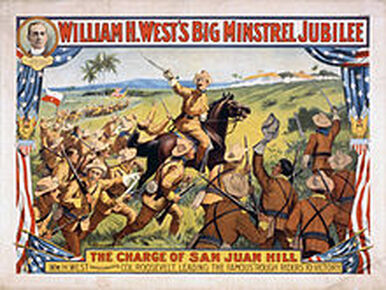 Part One: Content
What are the three main causes of the Spanish American War? Explain what each are…

Why was the Teller Amendment important?

Describe the major battles of the Spanish-American War.

Who were the Rough Riders and what were they known for?

(Imperialism) What evidence is there that America wanted to build an empire?

Why were Filipinos (from the Philippines) upset after the Spanish American War?

Explain what happened in the Philippine-American War.

​
Part Two: Historical Thinking Skill Assessment
Skill Assessed (HISTORICAL CONTEXT)
Historical context is an important part of life and literature, and without it, memories, stories, and characters have less meaning. Historical context deals with the details that surround an occurrence. In more technical terms, historical context refers to the social, religious, economic, and political conditions that existed during a certain time and place. Basically, it's all the details of the time and place in which a situation occurs, and those details are what enable us to interpret and analyze works or events of the past, or even the future, rather than merely judge them by contemporary standards. (From ThoughtCo).

To be successful on this part of your test, students must examine the source information and consider the context in which these documents were created. You will need to think deeper about what could be leading to why your documents are included, rather than simply answering what is in the documents.

You will have a practice assessment on Tuesday (Explosion of the Maine). We will talk through this together.

Write hints for yourself to be successful on this assessment below...